And so the Premier League season will come down to the last 90 minutes, with Manchester City and Liverpool vying for the title.

City, of course, have been here before. It was 10 years ago that the club had its ‘Aguero moment’, but fans will be hopeful that Sunday’s action is not quite so dramatic.

Pep Guardiola’s side have a one-point lead over Liverpool, plus a goal difference advantage of six, so they'll certainly be going all out for there three points - City are an 85% shot to be celebrating with the trophy come full-time.

Liverpool come into this match well rested, having rotated their side heavily for their hard-fought midweek win over Southampton.

Matches at Anfield have been a rarity for Jurgen Klopp’s side in recent weeks – five of their last six have been on the road – but they have been devastating in front of their home support this season. From their 14 victories, 12 have been at least by two goals, which is a run that should surely continue.

Wolves, after all, are finishing the season in lamentable form. They have failed to win any of their last six, including a 5-1 loss against City. During this run, they have conceded the opening goal in each match, so Liverpool should be heavily fancied to take an early advantage.

History is also stacked in favour of Liverpool. They have won their last 10 league matches against this opponent and, incredibly, have kept a clean sheet in eight of those games. Last season, they were easy 4-0 winners at home. Backed by what will surely be a raucous Anfield crowd, expect more of the same. 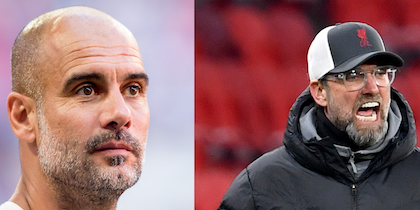 No-one at Manchester City will be taking Sunday’s fixture for granted – their experience against relegation-bound QPR 10 years ago is a guarantee of that. And with Steven Gerrard, a Liverpool legend, in the Aston Villa dugout, it is evident that the visitors will be fired up for this game.

City, meanwhile, have not been perfect at home in the league. Indeed, two of their three defeats all season have come at the Etihad Stadium. When they have won, though, they have often done so easily, racking up five, six or even seven goals in victories this term.

They have not found recent matches against Villa straightforward, though. Since the Carabao Cup final of 2020, they have won only one of four meetings against the Birmingham side by more than a single goal.

This may, then, be a tougher game than envisaged for Guardiola’s side, who also have to deal with the ghost of their recent disappointment against Real Madrid, in which they somehow threw away Champions League qualification in just a few dramatic minutes.

While it would be a surprise if they did not get the job done, Gerrard and Villa are sure to make it awkward, despite the handicap of having played in midweek.