The final day of the season is upon us with plenty to still be decided, including the third team that will make the drop into the Championship. We present a selection of our best bets from the 4pm kick-offs.

The Bees have had a fine season and could end their first Premier League campaign as high as ninth should other results go their way as well as a hefty goal swing.

That’s in stark contrast to their visitors who have to better Burnley’s result to stay up with the Whites’ hugely inferior goal difference anchoring them in the bottom three on the same points as the Clarets.

The last time the teams met in West London was in February 2020 with Thomas Frank’s observation that “they fear us” fuelling the Whites’ fire.

The West Yorkshire side won the Championship with the Bees losing against Barnsley in added time of the final game to finish third. With a 12-point gap over Brentford, Stuart Dallas and Liam Cooper told them to ‘mind the gap’ as they celebrated the title.

A spicy affair awaits. Pascal Struijk’s added-time leveller against Brighton last time out gave Leeds hope but it was one of only two goals in the last five games, from which they’ve claimed two points.

They will also be without Luke Ayling and Dan James, who were sent off in back-to-back games. Brentford are in fine form with two straight wins and haven’t conceded a home goal in four games. Jesse Marsch’s side have to find a balance between being tight at the back while taking any chances that come their way. 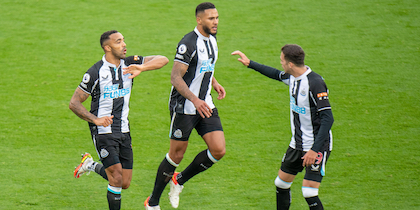 The Clarets claimed a point at Aston Villa on Thursday to haul themselves out of the drop zone on goal difference.

Nick Pope was heroic in goal - although Matt Lowton was given a straight red – as they got their first point in three games. They have their destiny in their own hands – win and they stay up, match Leeds’ result and they survive. They dug in deep at Villa Park and could have won it if Wout Weghorst had converted late on.

They face a Newcastle side coming off a 2-0 win against Arsenal, described by boss Eddie Howe as “the highest standard we’ve reached”.

Howe has guided the Magpies to a possible top-10 finish and has transformed a team that were five points from safety when he arrived in November. They’re a team full of quality, hunger and desire and in all likelihood Burnley will have to stand firm against a wave of attacks while taking any opportunities that arise.

The Seagulls can finish as high as eighth should they win and other results go their way. Graham Potter’s side have won four and drawn three of their last eight with their formation bamboozling a succession of teams. Leandro Trossard has been on target in four of the last six games.

The Hammers have booked European football once more next season and have taken four points from their last two games. David Moyes’ side are guaranteed at least a seventh-placed finish and could be sixth depending on the outcome of Manchester United’s fixture at Crystal Palace. Jarrod Bowen has scored four in as many games including a double against Manchester City last time out.

The Blues’ season concludes with them all but assured of third place as they're 18 goals and three points ahead of Tottenham. An inability to take their chances saw them draw against Leicester at Stamford Bridge on Thursday, but a match against the relegated Hornets offers an opportunity to go out with a resounding victory.

Watford have already started making plans for next season following the arrival of Rob Edwards from Forest Green Rovers. Their only victory on the final day of the Premier League season came back in 1999/2000, and they’re unlikely to change that on Sunday. They lost 5-1 to Leicester last time out and another heavy defeat is a distinct possibility.