The world’s biggest bike race gets under way this Friday with a 13-kilometre time trial around Copenhagen ahead of two more days in Denmark for what will be the most northerly start ever in Tour de France history.

Last year Slovenia’s Tadej Pogacar romped to his second successive victory after compatriot and main rival Primoz Roglic withdrew early on following a crash in the third of 21 stages. Pogacar, of UAE Team Emirates, eventually won the race by 5’20” on Roglic’s Jumbo-Visma teammate Jonas Vingegaard to cement his status as the best stage racer of his generation.

Now the 23-year-old will look to become only the seventh rider to win three Tours in a row on a challenging course that includes six summit finishes, two time trials, five sprint stages, and plenty of opportunities for punchy finishers and breakaway artists alike.

With forays into both Belgium and Switzerland as well as the opening three days in Denmark, the 3,328km route passes through the mountainous regions of the Vosges, Alpes, Massif Central and Pyrenees. It also includes a mouth-watering fifth stage that features eleven sections of the challenging cobblestone farm roads made famous by the annual Paris-Roubaix spring classic.

A long individual time trial on the penultimate day should keep tension levels high all the way to Paris, with the race culminating with the traditional circuits of the Champs-Elysees on the same day that the inaugural women’s edition of the race, the Tour de France Femmes, gets underway in the French capital.

Defending champion Tadej Pogacar (1.79) returns to make his third appearance in the Tour as out-and-out favourite to complete a hat-trick of wins. The Slovenian sensation has won all three of his stage races so far this season as well as the Strade Bianche one-day classic.

It’s a route that suits his strengths and Pogacar will be supported by a cast of strong climbers at UAE Team Emirates including the American Brandon McNulty, who has the attributes to target a top 10 finish himself.

Stiff competition will come from the slick Jumbo-Visma team of Slovenia’s Primoz Roglic (7.2) and Denmark’s Jonas Vingegaard (6.2). Former ski jumper Roglic, 32, came within one day of winning a maiden Tour title in 2020 before his compatriot wrested the yellow jersey from his shoulders in a jaw-dropping time trial of the climb of La Planche des Belles Filles in the Vosges mountains.

Roglic entered the 2020 Tour off the back of a bad crash in the Criterium du Dauphine preparatory race. He also hit the deck early on in 2021 to eliminate his chances before the general classification battle had got going. Following his subsequent withdrawal, Vingegaard made an accomplished debut to take second place in Paris.

Vingegaard, 25, finished over five minutes down on Pogacar but was the only rider to put the yellow jersey in difficulty throughout the race, riding clear on the fabled climb of Mont Ventoux. The duo come to the Tour fully fit and in excellent form; together they could ensure this race goes down to the wire. 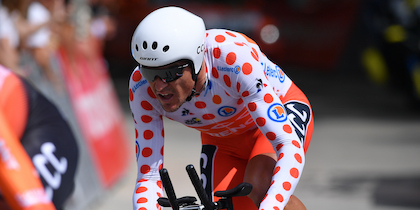 There are two other former Tour winners alongside Pogacar who feature on the startlist: Geraint Thomas of Ineos Grenadiers and his former teammate Chris Froome, the four-time champion who now rides for Israel-Premier Tech.

Welshman Thomas (30) showed a timely return to form with victory in the recent Tour de Suisse but a top-five finish – rather than the yellow jersey – is a more realistic expectation from the 36-year-old, who will share leadership at Ineos with the Colombian Dani Martinez (40). Froome, meanwhile, will simply hope to get through his tenth Tour unscathed in support of teammates Michael Woods and Jakob Fuglsang.

It has been five years since Froome last stood atop the podium in Paris, the 37-year-old having slowly battled back from a career-threatening injury in 2019, a year after his last Grand Tour victory in the 2018 Giro d’Italia. Froome has been a shadow of his former self ever since and it would be a miracle if he were to make the top 20 in what could be his last Tour appearance.

With the condition of the world champion Julian Alaphilippe unclear following a horrific high-speed crash this spring, French hopes lie with the ageing duo of Thibaut Pinot (300) and Romain Bardet (130). Both finished on the podium during Froome’s years of domination but have since struggled for consistency.

No place for Cavendish, Van Aert favourite for green?

But a route that offers few opportunities for the pure sprinters may play into the hands of old rivals Wout van Aert of Belgium and Mathieu van der Poel of the Netherlands in the battle for the green sprinters’ jersey. At least three punchy uphill sprint finishes could also reopen the door to Slovakia’s Peter Sagan, winner of the green jersey on a record seven occasions between 2012 and 2019.

Powerful finisher Mads Pedersen of Denmark will be extra motivated by the Tour starting in his home country, while the likes of Australian duo Caleb Ewan and Michael Matthews, the Frenchman Bryan Coquard, and Dutchman Dylan Groenewegen should all be in the mix for the fastmen’s points classification.